The Angus beef is considered one of the best meats in the world along with others like the Waygu from Kobe.

The origins of the Aberdeen-Angus variety are situated in the wild, native cattle without horns of northern Scotland. The name comes precisely from the counties of Aberdeenshire and Angusshire where this ox came up without horns. They were really two different oxen and with different names, but later they would cross the varieties and they still found some remain traces and it is considered the Black Meg like the cow founding of this variety.

This breed is characterized by its resistance and can be raised in areas of changing climates, making this strain can be brought up in various regions of the planet, in addition to achieving a high genetic variability allowing it to adapt to the characteristics and needs of each herdowner.

The cattle can be black or reddish and one of its most significant characteristics is that they do not have horns. They are raised in freedom, in extensive pastures during the first year or a year and a half, and then they are fed with cereals and especially with corn, which allows the animal to gain volume and depth, but always in a balanced and harmonious way with smooth shapes, rounded contours, easy finishing and without excessive accumulation of fat, as well as good muscle mass.

All these characteristics generate that this breed produces a high quality veined meat for its tenderness, juiciness and exquisite flavour and consequently to be considered one of the best meats of greater international prestige.

In our restaurant you can enjoy this meat in the Greek style, book your table through our web form or by calling us. 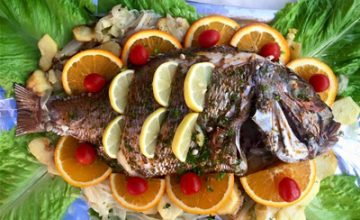